Around 14 thousand years ago the Columbia River Gorge was formed by repeated floods that tore through the Cascade Mountain Range carving a deep canyon that drops from its highest point of 4,000 feet to near sea level at the river below. 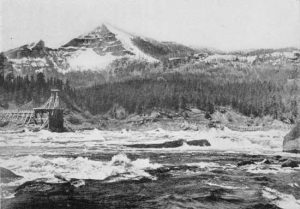 Cascade Locks, known initially as Whiskey Flats, is one of the oldest towns on the Columbia River. It sits on a section of the river that Lewis and Clark described in their journals as the “great rapids of the Cascades,” a stretch of raging water more than two miles long was formed by a massive ancient landslide. In 1805, while on their trek, the impassable rapids forced Lewis and Clark to portage around the Cascades. Pioneers on the Oregon Trail also found this stretch to be one of the hardest while on their journey.

Lewis and Clark wrote, “this great chute of falls is about a half-mile with the water of this great river compressed within the space of 150 paces… great numbers of both large and small rocks, water passing with great velocity forming & boiling in a horrible manner, with a fall of about 20 feet.” Later, pioneers traveling the Oregon Trail’s water route were forced to choose between taking the high, dangerous route over Mt. Hood’s steep Barlow Road, an overland toll road, or rafting down the Columbia, risking their life and property on the treacherous river. 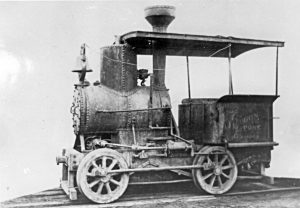 Because of the dangerous rapids, pioneers moving west on the Oregon Trail had to stop here. A small settlement grew up on the river banks in the early 1850s to help travelers portage around the rapids, first by foot, then by mule-drawn rail cars, steam engines, and riverboats. Cascade Locks was home to the first steam engine west of the Mississippi, the Oregon Pony, was built in 1862 to carry passengers and freight past the rapids (now on display in the Marine Park next to the Cascade Locks Historical Museum). 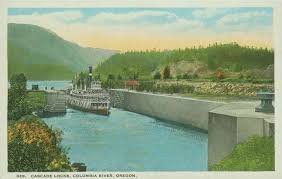 This was the dawn of the sternwheeler era. In the early years, daring captains tried to shoot the rapids in their large, flat-bottomed boats, often with disastrous results. By 1875 the U.S. Government approved the plans to build a set of locks to improve the navigation through the Cascade Rapids. Construction began in 1878 and the locks were completed on November 5, 1896 — and, modern-day Cascade Locks was born. The locks were an amazing achievement, with a lift chamber carved in solid rock 460 feet long, and 90 feet wide, with 8 feet of draft, deep enough for any vessel then on the river, and large enough to accommodate several at once. For the next 40 years, riverboat whistles echoed in the Gorge every day. Boats made their way up the river to ports in eastern Oregon and Idaho and down the river to the Pacific Ocean.

The locks made navigation on the river safer; soon riverboats made daily runs from Portland and The Dalles. The City of Cascade Locks was born amid this river traffic. Although the rising waters of the Bonneville Lock and Dam submerged the locks in 1938, Cascade Locks, the city, remains as a vital community in the heart of the Columbia River Gorge.

1938 the Cascade Rapids were submerged beneath the new Lake Bonneville, taming the great rapids forever and turning the river fronting Cascade Locks into a magnificent lake known for lively air currents. Bonneville Lock and Dam’s construction was one of the most massive Corps of Engineers projects to come out of the New Deal. Boats continued to ply their trade up and down the Columbia, and the town continued to thrive, fueled by large lumber mills and the vast timber stands in the surrounding mountains. 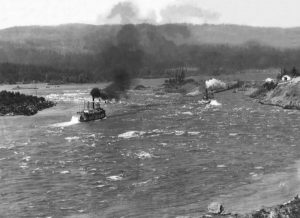 The historic sternwheeler, Columbia Gorge, still leads excursions from the town’s port district, and local Native Americans practice traditional dip-net fishing in and near the current locks as they have since time immemorial. 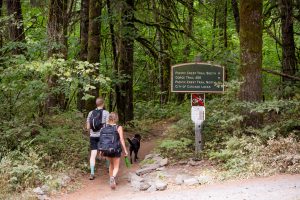 For the past 50 years, Cascade Locks has had the distinction off being the only incorporated city on the Pacific Crest Trail, where the trail crosses over the Bridge of the Gods. It is also the lowest point in elevation on the PCT, even lower than Death Valley. Over the decades, the number of adventure seeker who trek the whole trail has grown exponentially. Mid-summer, the town is bustling, especially around the third weekend of August during the annual event of PCT Days held in Marine Park. Today Cascade Locks has entered yet another new era as a destination for visitors seeking world-class recreation opportunities in a breathtaking natural environment.