Bridge of the Gods

Bridging the Past and the Present

According to scientific history, somewhere between 1100 and 1250 A.D., the first, natural Bridge of the Gods was created by an enormous landslide between the lava cliffs of Table Mountain and the North wall of the Columbia Gorge. The land bridge dammed the river, standing between 200 and 300 feet above sea level, high enough that Native Americans could safely cross the river. This natural dam created an inland sea in eastern Oregon, Washington, and into Idaho. The Bridge of the Gods collapsed around the 1690s — which coincides with the date of the last Great Cascadia Subduction Zone earthquakes — creating the rocky Cascade Rapids. 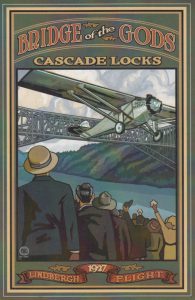 First built in 1926, the modern-day Bridge of the Gods was then raised in 1936 to accommodate the rising waters from the construction of Bonneville Dam. In 1927, in a daring feat, Charles Lindbergh flew under the bridge. 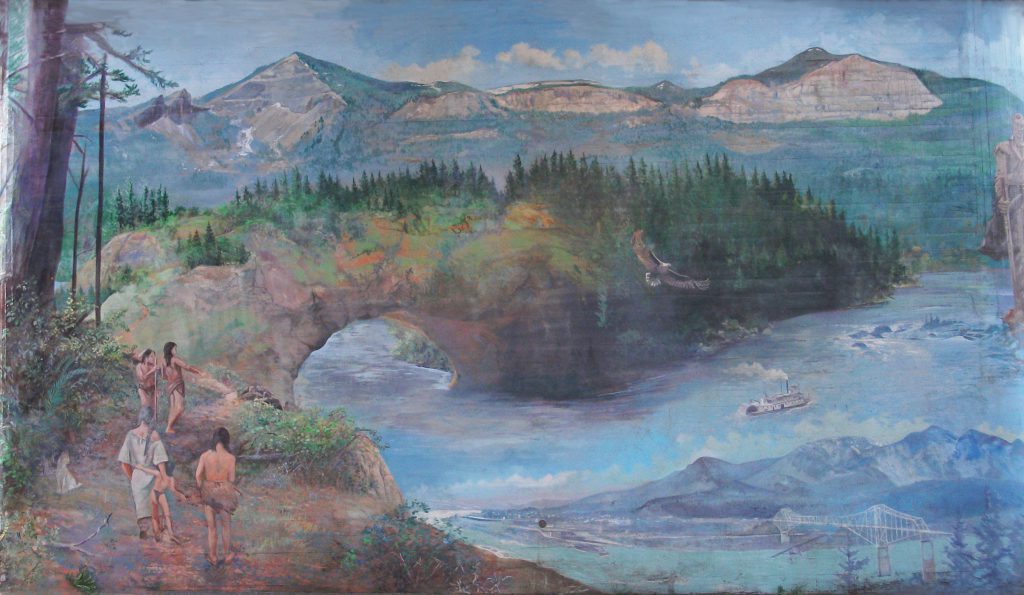 Native American legend speaks of the creation and destruction of this natural bridge. The People of the Columbia River had great difficulty crossing the wide Columbia River. Manito, the Great Spirit, was sympathetic and built a stone bridge for them. This stone bridge, called the great crossover, was so crucial that Manito placed Loo-Wit, an old and wise woman, as its guardian. The grateful People gave it a new name, the Bridge of the Gods.

At about the same time, Manito also sent to earth his sons — three great snow mountains; Multnomah, the warrior (Mt. Rainier), Klickitat, the totem-maker (Mt. Adams), and Wyeast, the singer (Mt. Hood). All was peaceful until beautiful Squaw Mountain moved into a small valley between Klickitat and Wyeast.

Squaw Mountain loved Wyeast but thought it fun to flirt with Klickitat, his big, good-natured brother. Soon a rivalry sprang up between the two brothers over Squaw Mountain. They argued, growled, stomped their feet, spat ashes, and spewed clouds of black smoke. Each hurled white-hot rocks, setting fire to the forests and driving the people into hiding. Finally, they threw so many stones onto the Bridge of the Gods and shook the earth so hard that the stone bridge broke in the middle and fell in the river, causing a series of huge rapids.

Klickitat won the fight over Squaw Mountain, and Wyeast admitted defeat. This victory was a severe blow to Squaw Mountain as she loved Wyeast. Though she took her place by Klickitat, her heart was broken, and she sank into a permanent deep sleep. She is known today as Sleeping Beauty and lies where she fell, just west of Mt. Adams.

At one time, Klickitat had a high, straight head, like Wyeast. But Klickitat truly loved Squaw Mountain, and her fate caused him such grief that he dropped his head in shame and has never raised it again.

During the war, Loo-Wit, the Bridge’s guardian, tried to stop the fight but failed and fell with it. The Great Spirit heard of her faithfulness and promised to grant her a wish. She asked to be made young and beautiful once more. The Great Spirit granted Loo-Wit her wish, turning her into the most beautiful of all the mountains. She is now known as the youngest mountain in the Cascades, the beautiful and powerful Mt. St. Helens.